If there is one thing that gets the blood pumping it’s a good scary film, but horror movies have an extra fear factor when they include real life monsters – creepy crawlies! This list of movies is sure to get your skin crawling. Be careful, you never know what is lurking in the top of a cupboard or in the bottom of your shoe…. 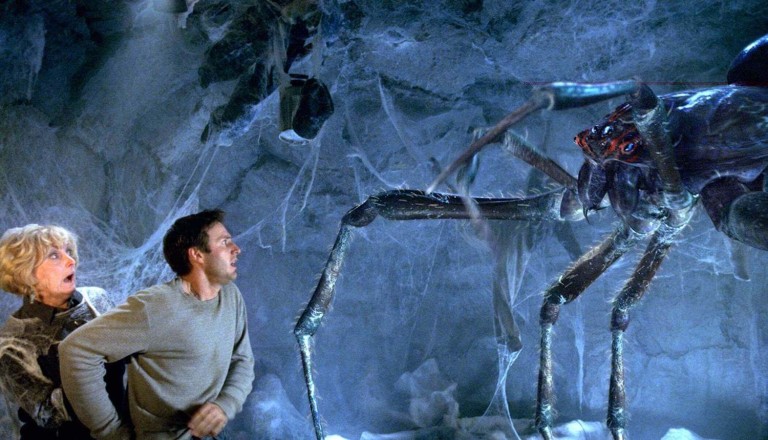 This film is sure to have you double checking the house for spider webs! This well-known horror movie features the popular Halloween insect, the common spider – except there is nothing common about them! A small town is plagued with unusually large spiders with a taste for human after a toxic waste spill infects a spider farm. Talk about terrifying, I don’t think these critters can be killed with just your regular pest control.

This nineties horror movie involves a cockroach plague that threatens the lives of children in New York City. A science experiment gone wrong draws on roaches’ real-life ability to adapt to their environment, highlighting just how hard they are to kill. While your home may not be under threat by the super-bugs, cockroaches come in teams – if you’ve seen one, there are sure to be more not far away!

We’ve all felt the fear of a sunny day when the yellow and black army is out in full force. This horror movie features the threat of killer bees that have deadly venom and attack without warning…. not unlike the behaviour of the common wasp. Though this film may be fictional, bee hives are not. Bees are under threat and should be removed safely from a home if an infestation occurs. If you spot resident bees, call a team who can relocate them to another location.

These bugs are never fun at picnics, but this near decade old insect horror film takes the ant invasion to new levels. When a large swarm of ants arrives on Earth and threatens the human race, a group of scientists must find a way to stop them. Regular household ant infestations aren’t nearly as hard to get rid of when you know what you are doing. However, don’t be too complacent; a few ants can quickly turn into an entire army once they relay where the food is back to the nest.

A lonesome fly buzzing around the house isn’t as much of a concern as it is a nuisance! This eighties American horror flick features a science experiment gone wrong (as all classic monster science fictions do). This isn’t a fly invasion film, it rather follows a man turning into a fly-hybrid creature (not something you are likely to find in your home). Nevertheless, flies are a serious problem when allowed to grow out of control, especially as they are carriers of bacteria and disease. If you notice an unusual number of flies buzzing around your household, it may be time to get the pest control experts in to deal with the issue.

There you have it, five creepy horror movies filled with critters you are likely to find around the house. There are simple steps you can take to protect your household from pest infestation, but it’s always safer and more effective to prevent pest problems before they occur by enlisting the help of Perth pest control professionals. At Bug Busters, our technicians are experienced in protecting Perth homes against insect infestations.

If you want to prevent a pest problem in your home, call Bug Busters today on 08 9493 1313 to organise an inspection with your local experts.

We had an appointment scheduled very quickly and easily with Bug Busters. Aaron was on time and a true professional. He was knowledgable, open, and explained the whole process easily and clearly. Gave us a guarantee that our problems would be solved and if there were any future issues he would attend to them himself with the utmost expedience. Aaron was a real pleasure to work with and i feel significantly more comfortable after working with him. Would recommend their services to anyone who needed them.

I found the young man named Deryn who came to deal with our rodent problem to be extremely polite, personable and knowledgeable. He was on time and friendly and knew a lot about the behaviours of the rat species. I would highly recommend Bug busters and will definately them for future pest problems when they arise.

Bugbusters installed termite traps around my house and shed many years ago. Every 3 months the traps are inspected for any termite activity. At intervals the house, ceiling and shed are are checked for termites. They have also dealt with wasp infestations and put rat baits in the ceiling.. Their operatives have always been helpful and friendly. I would recommend Bugbusters to anyone.

I have used Bug Busters on a number of occassions over the last 15 years. The last time only a few days ago.. Derryn was absolutely client focussed; professional; neat and cleaned up impeccably my jarrah floors that had just been re varnished. I have no hesitation to recommend this company.. Five stars from me. Paul Vic Park.

Staff friendly and courteous and provide excellent customer service. Contractors efficient and knowledgeable and are always willing to provide extra assistance when required. Highly recommend this company for residential and commercial pest treatments.